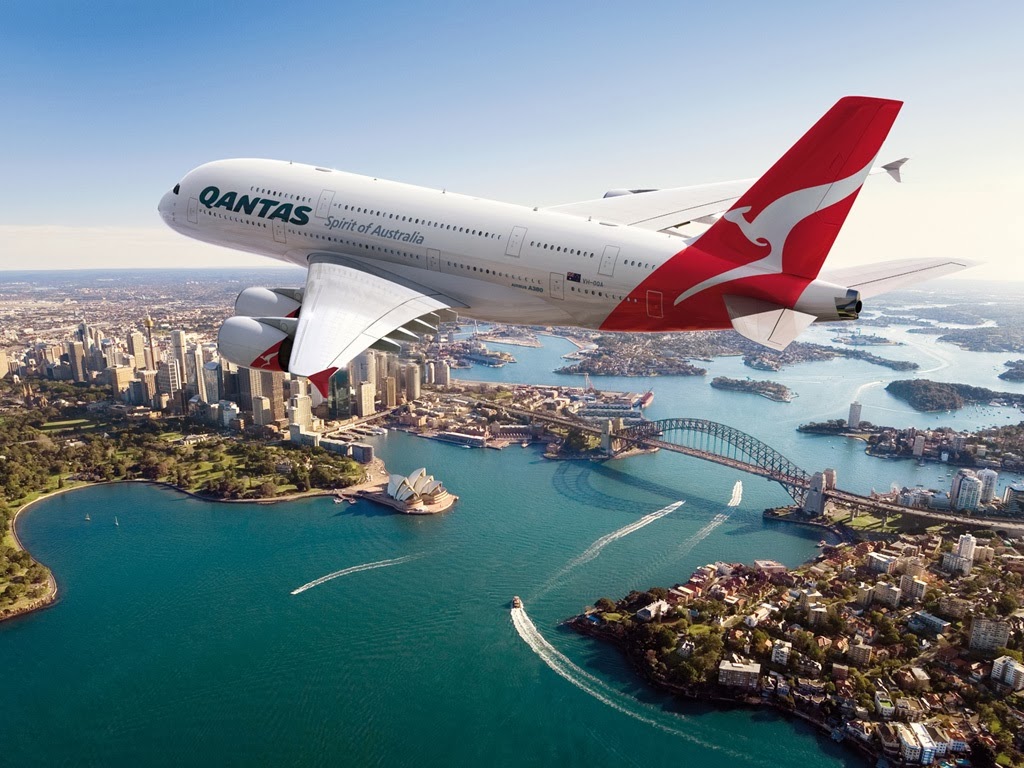 I'm in a new area, Mortdale, with my new companion Elder Anderson (who is the man!) and I'm loving life :) We've got a few pretty good investigators that we're working with and found some really great potentials. Oh, that's what I should tell you about. So we had a crazy miracle this week. Earlier during the week, Elder Anderson and I weren't feeling too well so we decided to stay home and take a quick nap and hope the pain goes away. Elder Anderson was downstairs laying on the couch and heard a knock at the door. He answered it and met a man named Steve. Steve thought our flat was for rent so he was asking about it, we informed him that unfortunately it's not for rent. He turned away to leave and then turns back around and asks "so what exactly do you do anyway?" We told him that we're missionaries for The Church of Jesus Christ of Latter-Day Saints and teach about Jesus Christ and the gospel. He says, "Man, I could really use some of that in my life..." then told us about some problems he's going through. What?! I didn't know what to say, I was genuinely in shock. Now just to clarify, I wasn't in shock because he understood the need for Christ in his life, I was in shock because he came to US! He knocked on OUR door. HE asked to know more. We did literally nothing except answer the door. He was prepared by God to receive the gospel of Jesus Christ and I'm super excited to teach him and help turn his life around. Also, shortly after that exerience, both Elder Anderson and I didn't feel sick anymore... Christ led us to make sure we were at the right place at the right time. And that just so happened to mean staying in the flat a little while longer! I love being a missionary :) 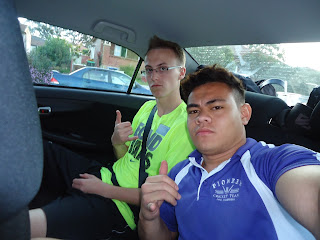 Elder Vaelua and Nick going to a service project 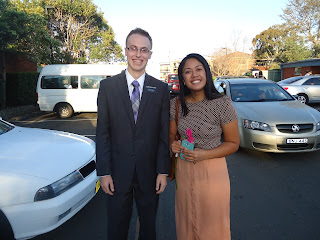 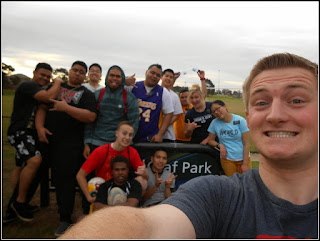 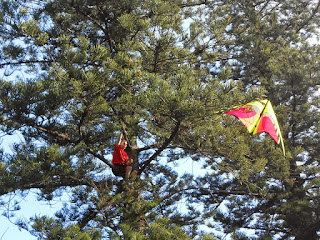 Getting President Back's kite out of a tree
Posted by Elder Macfarlane at 11:51 AM No comments:

Hello hello hello!
Things are just going great in the wonderful country of Australia! I still have a stomach ulcer, which is annoying because I have to continually have some sort of food with me at all times, but that's about it. I decided I'm not going to go to the doctors office anymore because all they do is tell me something I already know, take a test to make sure what I already know is actually true, and then tell me I need to come back again so they can do it again. All of this for $50 per day... NO THANKS! I know how to deal with it so I'll just keep doing what I'm doing and hope I don't die :)
I have some sad news... I got transferred from Bankstown 1st! :( I've been in that area for 6 months now and got really close to that ward. It was really hard to say goodbye to everyone on Sunday after church! I will especially miss our bishop's family, the Tufuga's! We have been teaching Jack, Jane, Paleso'o, and Peter about the church and they were all doing so well! I love them all so much, I hope the next missionaries will love them as much as I do and keep helping them progress in coming closer to their Savior, Jesus Christ! Also Mereana, our recent convert! I'm gonna miss her a lot too! It's so cool getting to watch her life continually change as she becomes more involved with church and now she's got a calling as being the primary's secretary! :) cool stuff! :)
I've got some exciting news as well! I just got called as a Zone Leader in Mortdale! My companion is Elder Anderson. I'm super sad about having to get transferred from Bankstown, but I'm excited to try out being a Zone Leader near the mission home. Plus I live with the Assistants to the Mission President. That's quite a new experience. It's only been one day so far, but I think I'm gonna like this area :)
Alofa 'atu!
Elder Macfarlane 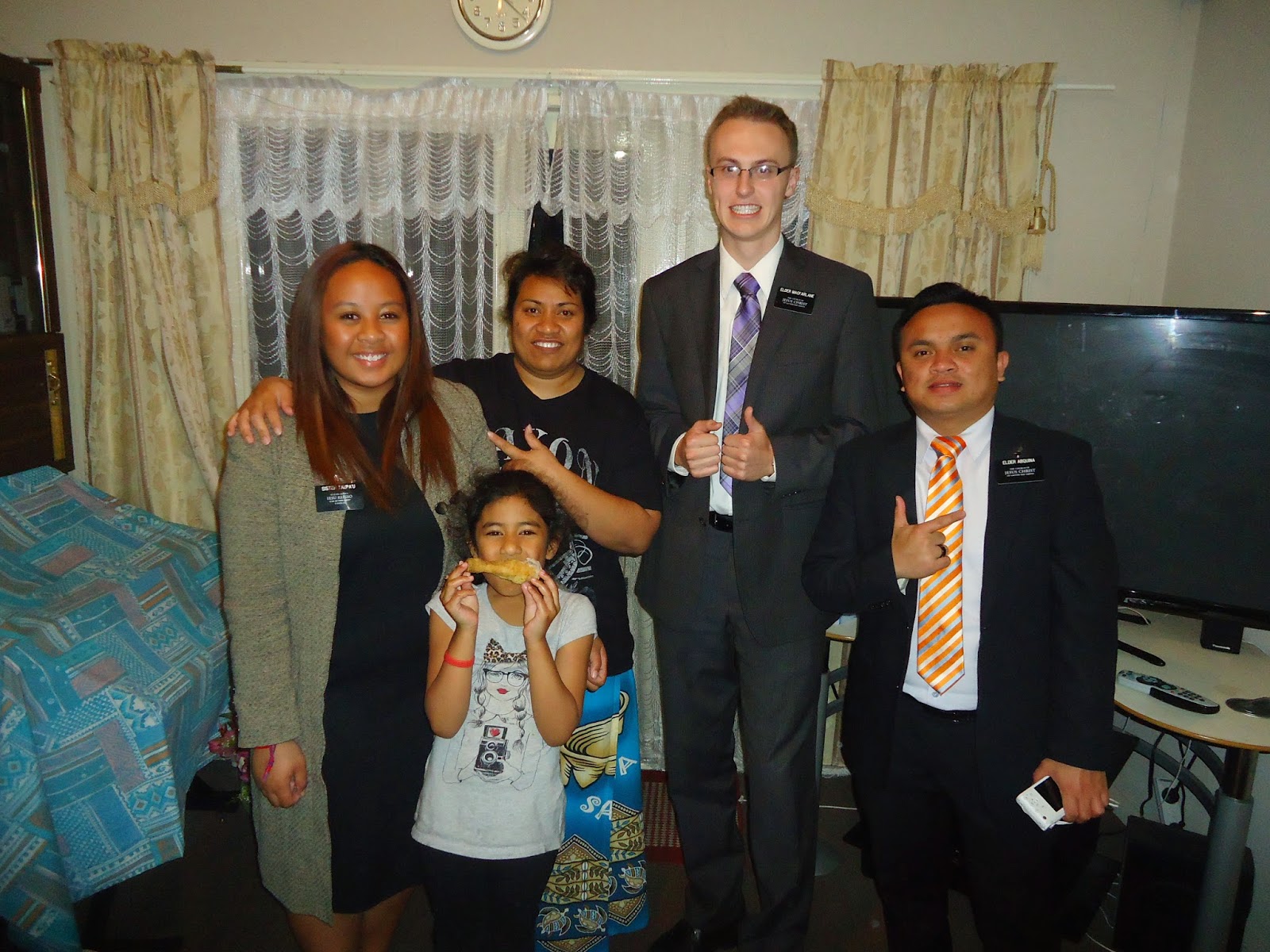 Nick's Samaon momma, her daughter and two other missionaries 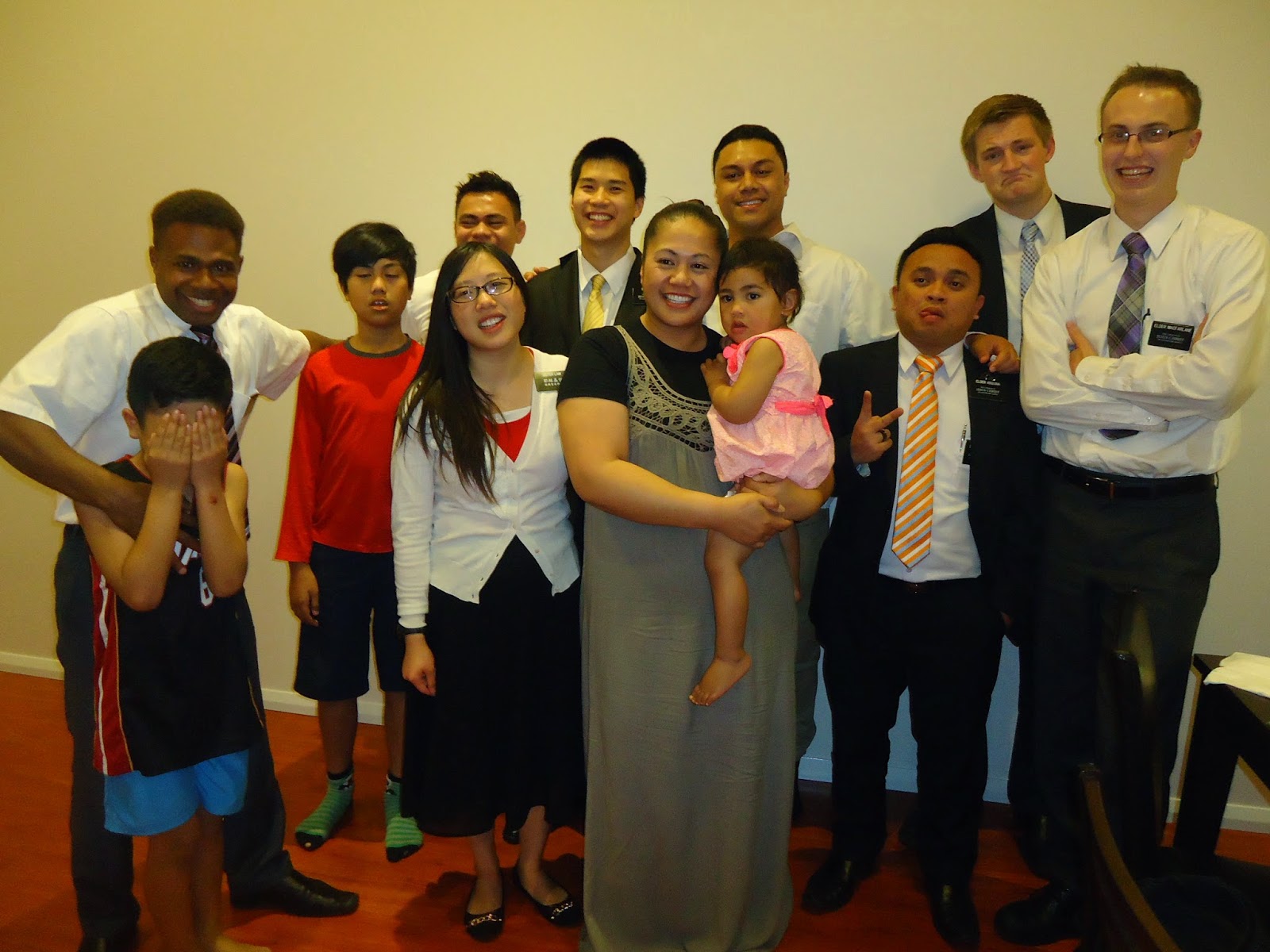 The Bishop's family, the Tufuga's 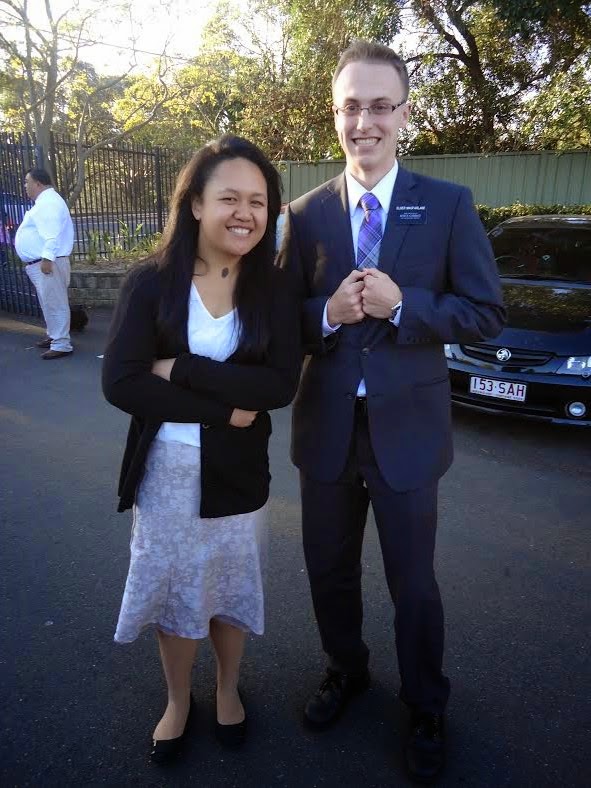 Mereana (new convert) and Nick
Posted by Elder Macfarlane at 9:59 AM No comments:

So this week instead of updating you on my life, I wanted to update you on the life of one of my friends and fellow missionaries, Sister Lavine. Many of you may have already heard the story or part of the story, but I'll tell the story for those of you who are unaware. A few days ago there was a rainstorm. Nothing special, just a typical rainy day. As the storm goes away, you could see two rainbows among the distance clouds (that's right, a double rainbow!). A missionary, Sister Lavine, pulls the car over to the side of the road to take a picture of this beautiful scene. Unfortunately, as she's taking the picture, she doesn't see the car drifting towards her from behind. The car hits the side of the missionaries car, hits Sister Lavine, takes her with the car a short distance, and somehow Sister Lavine gets pinned under the car... Sister Lavine was quickly taken to the hospital to be taken care of. With an accident like this, she should not be living much longer, or if she does make it through she will definitely have many extreme injuries and probably a few long lasting injuries. Upon arrival at the hospital, she in unconscious and has bruises all over. Word spread quickly about Sister Lavine and the terrible condition she was in. Prayers and fasts were being offered on her behalf all across the country, and soon across the world. Yesterday at church, we were informed in more detail of how Sister Lavine is doing. She has a little bruising in the brain and a little bleeding in her lungs. She is still unconscious but, she has no broken bones, all her vitals are good, and she is already breathing on her own!
This experience is far from over, but I thought I would share this story as a testament of the love our Heavenly Father has for his children and for the power of fasting and praying. From what I'm told, over a half million people across the world fasted and prayed for this daughter of God. And by some incredible miracle, she is doing amazing! Thank you so much for all of you who have taken part in fasting and praying for Sister Lavine. She is a great missionary and a great person. I am so thankful to our Heavenly Father for keeping her safe. Anything is possible with God on your side!
I love you all and hope you have a great week!
Elder Macfarlane 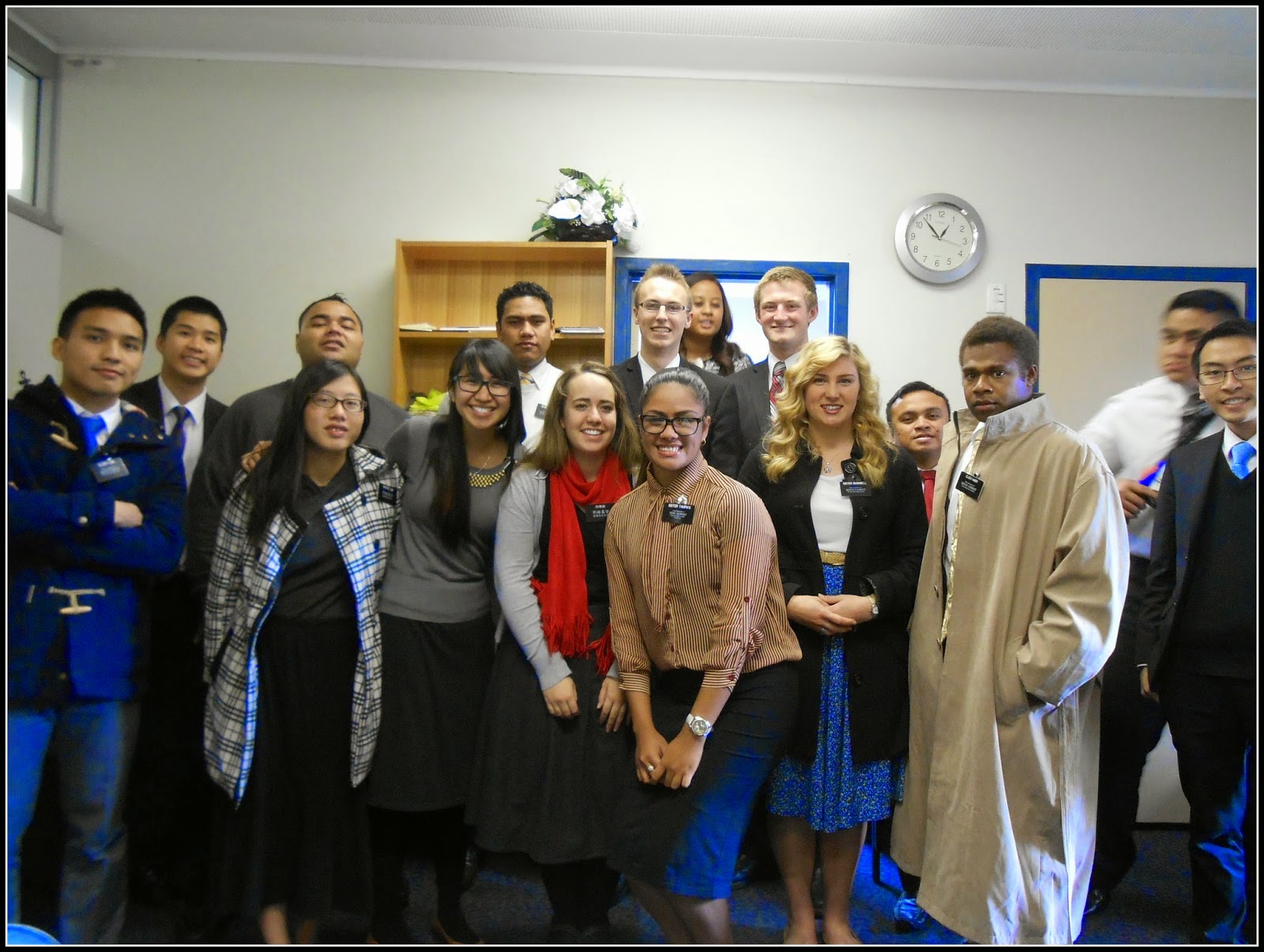 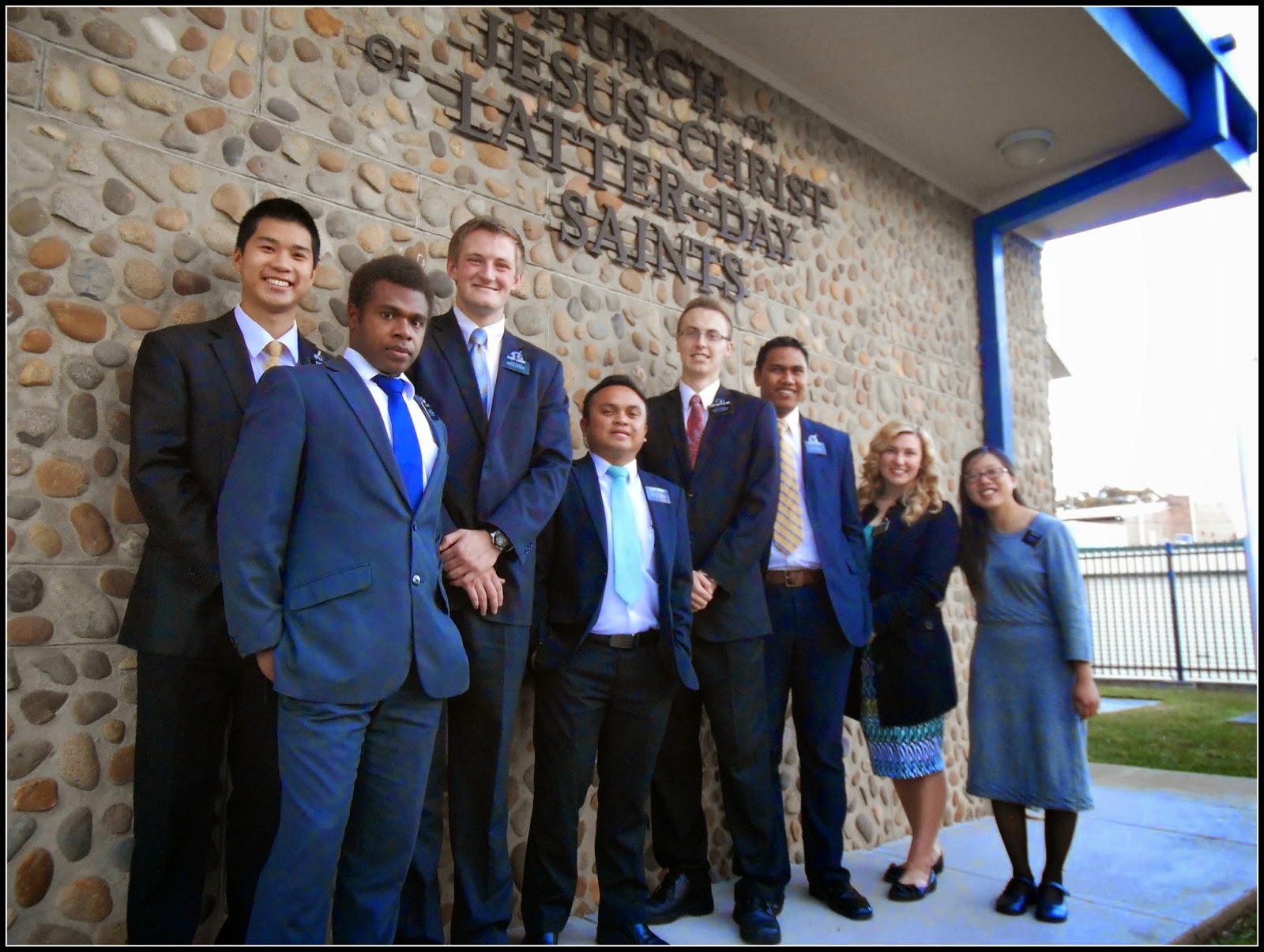 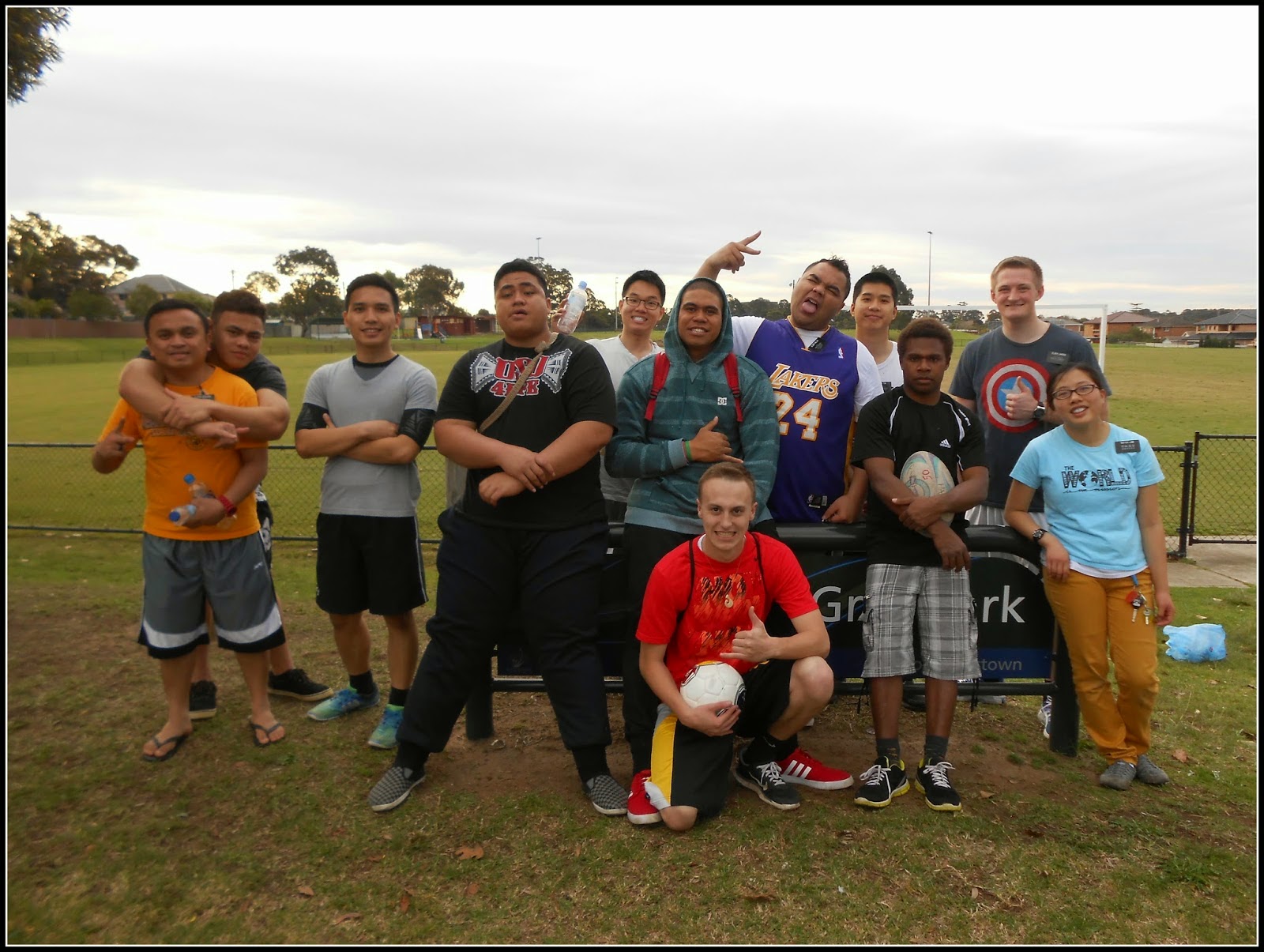 These pictures I "borrowed" from Elder Larsen's blog! Thanks!
Posted by Elder Macfarlane at 8:06 AM 1 comment:

This has been a busy week that's flown by! I've noticed time is starting to go by much faster now, I kind of have mixed feelings about that. It's great because that means I get to see my family sooner and that problems/struggles that I have will go by quicker. But that also means my time being a full-time servant of the Lord is going to go by fast too! I love and miss all of you back home but this is where I need to be and I love being here serving the people in Australia!
So this week we had zone conference. Zone Conference is a 6 hour meeting with the important people of the mission (Mission President, his wife, and the Assistants)... I did not have a great attitude going into this meeting for obvious reasons. But WOW! That was so great! I will never look down on conferences like that ever again. I had the wonderful opportunity to listen to the leaders of the mission talk to us about how to be better missionaries and how to help others come closer to Christ! I left that meeting feeling great and quite motivated to help the world feel God's love!
So what did we do with this motivation? Well we did heaps of service, we actually took two full days helping people move from one flat to another and cleaning the old flat! It was a lot of work, but I love doing service so it was great! On top of helping others out physically, we also did heaps of spiritual helping! We got to visit with one of our recent converts, Adel, who had a referral for us to visit, and talk with him for a while. After visiting with Adel, we went over to his neighbor's house, Paul, and had a fantastic chat with him. Paul is a theology professor so he is very educated in religions and was curious about our religion, The Church of Jesus Christ of Latter-Day Saints. Adel had given him a Book of Mormon last week and a few pamphlets about the church. By the time we visited him, Paul had read all of those things cover to cover! He was prepared with questions, thoughts, and comments which he had written nicely on post-it notes for us to help him with. We had a great talk and he invited us over again next week to continue teaching him about the church. We invited him to say the closing prayer and he happily accepted since he'd prayed many times before. But when he said amen, he looked at us with a funny look on his face and said, "hmm... that prayer felt different, it felt, good." Paul has just experienced the feeling of the spirit! I was happy for him and am excited to continue teaching him and seeing him progress!
Yesterday (Sunday) we put on a Fireside for our ward about missionary work and how the members can help. It was a great experience and the members are excited to help and continue sharing their testimony of the gospel to their friends and family. I'm excited to see how this work continues to grow! :)
Don't forget about my challenge from last week! If you weren't able to read it, go check it out! Serve those around you! Your simple act of kindness could start a chain reaction!
Love you all and hope you all have a great week! God loves you! Never forget that! :)
Elder Macfarlane

Posted by Elder Macfarlane at 7:09 AM No comments:

Elder Macfarlane
PO Box 456
Mortdale
NSW 2223
Australia
It costs $1.10 to mail up to a 5 page letter from the USA (FYI).
Nick's email: nicholas.macfarlane@myldsmail.net 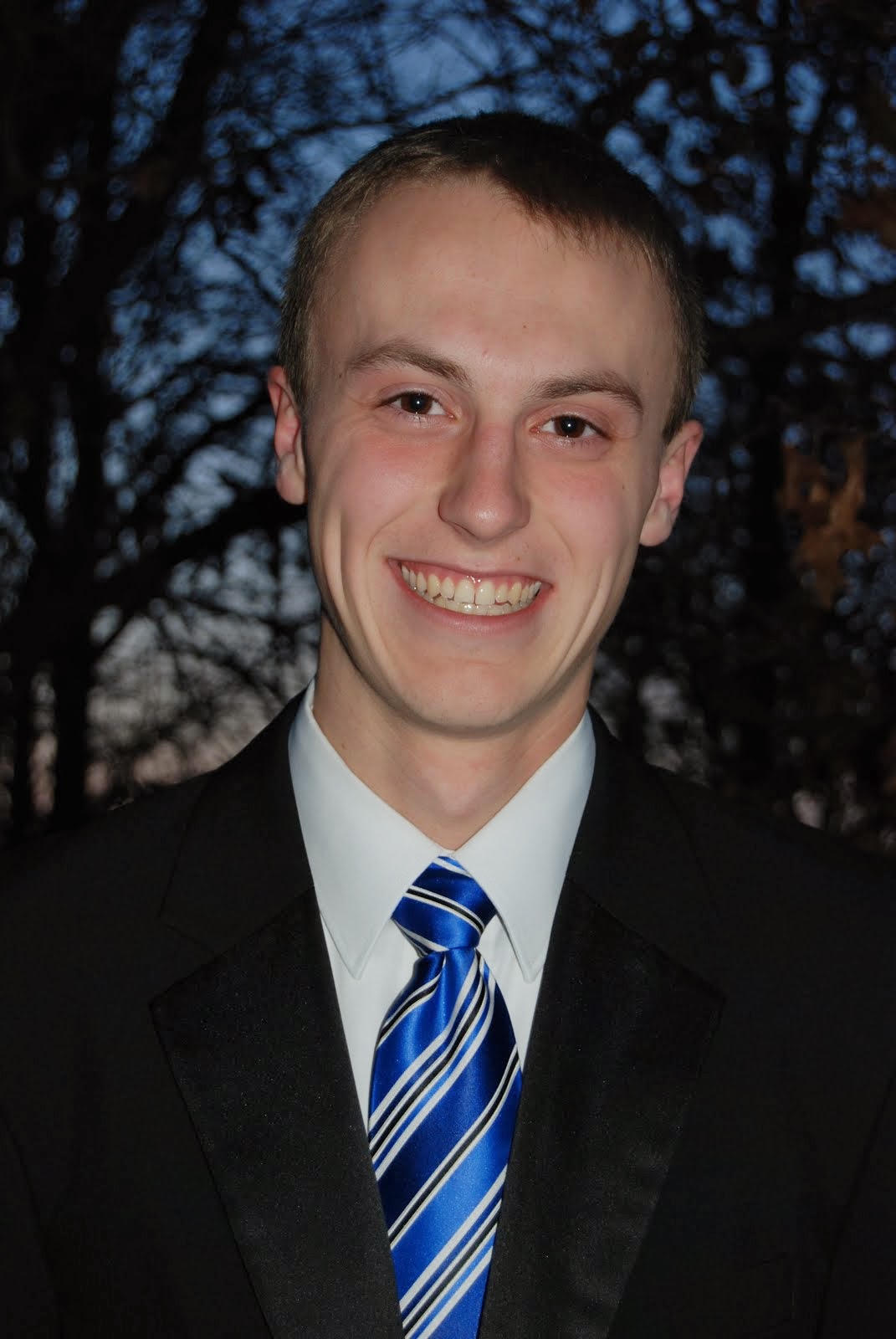 Elder Macfarlane
I am currently serving as a missionary for The Church of Jesus Christ of Latter-day Saints in Sydney, Australia.